Lawmakers and Hospitals Take Action to Curb Violence Against Nurses

Nurses don’t expect their jobs to be a cakewalk. Stress, hard labor, fatigue, and working daily with sights, sounds, and smells that would make many average adults queasy—all of these go with the job, and nurses everywhere make the best of them. But if there is anything that a nurse does not have to accept, it is violent behavior from the people that they serve. Assaults on nurses by patients, visitors, and others are an unfortunately common problem, but it’s a problem that medical associations across the country are working together to solve. Through public campaigns, professional forums, and internal memos, they are making it clear to nurses and patients everywhere: Physical attacks do not go in a nurse’s job description.

“Violence has been going on for a long, long time in emergency departments. And nurses have been told in the past that this is just a part of your job,” said JoAnn Lazarus, president of the board of directors for the Emergency Nurses Association. “Now we’re raising the awareness that it’s not just a part of your job. You don’t have to be assaulted. You can do something about it.”

Last June was a milestone for Lazarus’ association, when Texas became the 34th state to raise the penalties for assaulting emergency-department nurses. The bill, which both houses of the Texas legislature unanimously approved and Governor Rick Perry signed into law, designated such assaults as “third-degree felonies.” They had previously been “Class A misdemeanors.” 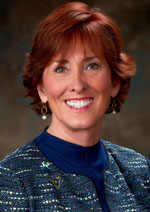 JoAnn Lazarus, MSN, RN, CEN, and current president of the Emergency Nurses Association board of directors

Up until now in Texas, it’s been a third-degree felony to assault firefighters or police officers, but not emergency-room nurses. The new law gives nurses the same legal protection as their crime-busting and firefighting counterparts.

The Emergency Nurses Association had worked over the previous four years to raise the issue with Texas lawmakers and see the law through to enactment. Representatives from the association and several partner organizations, including the Texas emergency physicians association, continuously met with state lawmakers and advocated to them for action.

“It was a group that came together to highlight the fact that violence is a problem in emergency room settings that was the impetus,” said Lazarus. “That’s pretty much what happens across the country. Nurses bring it to elected officials’ attention.

Violence against emergency-room personnel had been a rising concern in the Lone Star state and continues to be a problem throughout the country. Incidents run the full range from actions such as pinching, slapping, or kicking, to throwing nurses against walls or down flights of stairs, and in extreme circumstances, to severe beatings or sexual assaults. In a few cases, nurses have even been murdered.

Coworkers, strangers, and individuals who personally know the nurses all account for some of the assaults. But the patients are the perpetrators 48% of the time, according to the American Association of Critical-Care Nurses.

An Emergency Nurses Association survey in November 2011 found that in just one seven-day period, nearly one in ten emergency-room nurses had suffered some form of physical violence. And those numbers only include the violence that gets reported. Even more incidents could be occurring but never being added to the final tally because the nurses fear that they could face repercussions for reporting them.

“Some have put up with dysfunctional behaviors for so long that they do not even recognize it as workplace violence. The culture is such that it does not get addressed in fear of retaliation,” said one Temple, Texas, nursing officer, speaking only on condition of anonymity. “For those that don’t admit it happens, I feel they are walking around with blinders on.”

She recalls an American Association of Colleges national conference several years ago, in which she delivered a presentation on workplace violence. Most attendees, a large share of them from military or veterans hospitals, stayed fairly mum during the presentation when she asked them as a group if violence was a problem at their facilities. But quite a few opened up to her in private afterwards.

“During the week I had several people come up to me one- on- one and told me that it does exist. Many were military or nurses that worked in the VA (Veterans Administration) system. Several broke down in tears as they described some of the behaviors exhibited along with what was tolerated by their administration,” she said.

Health Facilities Management surveys nearly 900 health-care facility management professionals yearly in its annual Hospital Security Survey. The most recent, in 2012, found that 25% of respondents were reporting more incidents of violence at their facilities from just one year prior; another 7% saw fewer such reports.

Why the Rise in Incidents?

Some of this is simply more nurses coming forward to report incidents. But there is, to a degree, also more violence taking place. Reasons why are many. The magazine cites as some factors the recent changes on the ground stemming from growing populations of patients, many of whom are uninsured and therefore require more time to process all their paperwork, combined with the squeezing of those populations into fewer hospitals as many health-care facilities close under tight state and local budgets. Wait times for care consequently increase, which leads to tensions in hospital wards and waiting rooms running even higher than they normally would.

“Now we’re raising the awareness that it’s not just a part of your job. You don’t have to be assaulted. You can do something about it.”

It seems like hospitals everywhere are under pressure to keep doing more with less and less: treat growing populations of patients, including many with acute problems or lack of insurance, while many specialized facilities close or merge. Many hospitalized patients may be kept waiting for treatment due to short staff and too many other patients also needing care. And while this doesn’t excuse patients assaulting nurses, it appears to be a contributing factor.

Naturally, some hospitals have bigger problems than others. Any facility that treats large numbers of patients who have psychiatric or substance-abuse problems, for instance, may be more likely to see violence. According to the Emergency Nurses Association’s latest annual Violence Surveillance Study survey, which polled more than 3,200 nurses across the United States in 2011, patients who were drunk accounted for 54.7% of the assaults, while 45.9% were under the influence of drugs and 43.1% were psychiatric patients.

Emergency-room admissions of patients exhibiting psychiatric disorders or drug and alcohol-abuse-related episodes climbed rapidly after 2006, according to Kaiser Health News, due to the closure or consolidation of many specialized psychiatric and substance-abuse rehabilitation centers as tough economic times prompting many state and federal cutbacks in funding for mental-health and addiction-treatment programs.

In a 2010 commentary in the American Journal of Nursing, emergency-department nurse Jessica Leigh Taylor of St. David’s South Austin Hospital in Austin, Texas, encouraged nursing associations everywhere to make deterring violence a “top priority” and hospital directors to institute and enforce “zero-tolerance policies” at their facilities. Hospital staff at all levels could also form committees to assess violence and violence prevention, encourage nurses to report any incidents, and make sure that nurses who experience violent incidents get the support and solidarity that they deserve.

The issue is an especially poignant one to Taylor. As she related in her commentary, she herself was once attacked by a patient.

“I’m not a victim anymore. I’ve declared that it’s not acceptable to abuse or harm me at work, and every nurse should make the same pledge,” Taylor wrote.

Hospitals around the country have been boosting their own internal security in the last few years. In many facilities, the in-house security teams are collaborating with the IT departments on upgrades to the ward monitoring equipment. These include new video surveillance to keep an eye on hospital rooms and electronic RFID tags that track where any patient is at any given time. Facilities are also setting up wireless panic alarm systems, remote-access controls that only open doorways to those with the designated bar-coded name tags, and computer software that accesses every patient’s record and notifies staff in advance if he or she has committed violent or disruptive behavior in a hospital in the past.

“I’m not a victim anymore. I’ve declared that it’s not acceptable to abuse or harm me at work, and every nurse should make the same pledge.” ~ Jessica Leigh Taylor, RN

Some non-technological solutions are also going into use. Emergency rooms are increasingly utilizing spare hallway and waiting-room space to see more patients in less time. Some are also converting select ward rooms as secured “safe rooms” for holding patients that present clear dangers to themselves or others. Management teams are also working with their hospitals’ staff on ways to streamline the patient-registration process, fast-track the less-acute injuries and illnesses, and better coordinate the inpatient floor nurses.

“We have to work together to find ways to more effectively move patients through the system the less people we have to hold the lower the waiting times and the less violence you’re likely to have the happier everyone is likely to be,” says Lazarus.

The most critical piece of the solution, however, is the nurses themselves. Lazarus stresses the importance of every nurse observing patients and visitors and recognizing cues—be they verbal, body language, or something in the situation itself—that suggest a violent incident may be about to occur. Then that nurse can take steps to de-escalate the situation or, if necessary, eject himself or herself from it.

“They need to know when to call for help. Felony laws are great if something happens but they’re not necessarily going to be the deterrent the deterrent is going to be keeping that from happening in the first place,” Lazarus said.

Nurses can find violence-prevention courses that train them in de-escalation techniques. These courses can be very worthwhile, according to Lazarus. Some states even require them.

Visit these resources for additional information:

Learn about becoming a Registered Nurse, LPN or LVN in your state:
To View Full U.S. Map Click Here.