The Future of the Associate Degree in Nursing Program

The associate’s degree in nursing (ADN) has been the benchmark credential for getting a nursing job for the past 40 years, but change is now afoot. A small but growing number of U.S. hospitals are now only hiring nurses that have a bachelor’s degree in nursing (BSN) or higher. And indicators are that many more hospitals will join them in years to come.

What sets the two degrees apart? The amount of ground covered, for one thing. A BSN program may feature some additional instruction in communication, leadership, critical thinking, and the social sciences. It prepares its students to take on a wider variety of roles, such as teaching, consulting, research, and administration.

Not surprisingly, the BSN is also a bigger investment of time. An ADN involves around 21 months of study (According to an article presented by Rasmussen College), at the end of which you take the NCLEX exam. Pass this exam, and you have an ADN. The BSN is an additional year or two of study—it’s a four-year degree, but if you’ve earned the ADN, you’ve already completed two or more years. As such, if you’re a registered nurse who’s already got an ADN, enrolling in school again and getting that BSN is an option via an RN to BSN program.

It’s an option that more and more nurses are pursuing. Whereas around 35% of nurses had attained BSNs as of 2008, 55% were BSN-credentialed in 2013, according to the American Association of Colleges of Nursing. More than 600 nursing schools now have customized “RN to BSN” programs just for those ADN-credentialed nurses who are already practitioners but want that extra training.

Even more hospitals would be BSN-nurses-only if it were up to a few New York lawmakers. The state legislature has held hearings on a proposed “BS in 10” law, which would require nurses who don’t already have bachelor’s degrees to earn them within their first 10 years of practice. Its advocates tout it as a means to raise the skill levels of today’s nurse workforce. Click Here to check out the New York Daily News piece on the BSN in 10 legislation.

The bill came up for debate last year and died in committee, but it’s back this year with bipartisan support, its main sponsors being Democratic Assemblyman Joseph Morelle of Rochester and Republican Senator James Alesi of Monroe County. It’s also got the endorsement of many nursing associations and health policy organizations, such as the New York State Nurses Association: In 2011, when the BS in 10 proposal first came up for debate, the association issued a memo citing a 2003 University of Pennsylvania study that found that for every 10% increase in a hospital’s staff holding bachelor’s degrees or higher, there are 5% fewer deaths in surgery.

The AACN also backs BS in 10. A presentation by the AACN’s New York chapter in February 2012 credited BSN programs with helping nurses to strengthen their analytical and critical-thinking skills. It also cited studies that found much higher job satisfaction among the BSN-certified nurses. Dozens of other state nursing organizations and nursing schools have voiced support for BS in 10, as well. Most argue that the law’s goal of a better-prepared nursing workforce is in both the nurses’ and patients’ best interests.

“The better educated the nursing work force is, the better the patient outcomes,” Dianne Cooney Minor, dean of nursing at St. John Fisher College in Rochester and a member of the New York State Board of Nursing, adding that “there are sufficient numbers of degree-completion programs in our state to allow all nurses to complete their educations at the baccalaureate level.”

New Jersey’s legislature has also held hearings this year on a BS in 10 law, but not enacted anything just yet. Nor has any other state in the union. But the notion that many more nurses should be BSN-credentialed has gained momentum in national health-care policymaking circles. Researchers from the Institute of Medicine and the Robert Woods Johnson Foundation jointly called for increasing the U.S. nurses holding BSNs to 80% by 2020.

“Because individual and population health needs are changing, and our health care system is ever-evolving, we need nurses to know more and be better trained to provide care in a transformed system,” explained Harvey Fineberg, president of the Institute of Medicine.

Demand for higher-skilled nurses is rising for a few reasons, first of which is America’s surging population of elderly adults. This population needs more and more complex care than other age brackets. Coupled with this is the looming retirement of a huge swath of the present-day nursing workforce—more than 900,000 of America’s 3 million currently-employed nurses are over 50 years old—which leaves many new nurses with more responsibilities and bigger workloads to fill in the gaps. 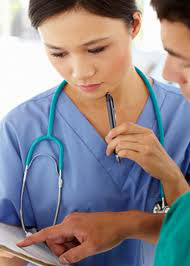 Making matters worse, there is a looming shortage of doctors, too. The American Association of Medical Colleges projects a shortfall of 91,500 physicians nationwide by 2020 (How to Fix the Doctor Shortage). Medical systems have been feeling the strain already for the past few years and have compensated through “task-shifting”—having nurses take over some physician duties such as writing prescriptions and diagnosing some of the simpler and more treatable cases.

A nurse with an ADN can do many indispensable day-to-day tasks, including most of the duties the public thinks of when it thinks of nurses. They can talk to the patients and jot down their symptoms, take vital signs, coach surgery patients on what to do after their operations, and teach any and all patients how to manage their illnesses and injuries better. Many hospitals, nevertheless, need more. Their nurses will face bigger and more challenging caseloads than their ADNs may have prepared them for—they need bachelor-level training according to some.

A BSN may also be the way to go if you want to work in a specialized area, such as oncology or physical rehabilitation. The same holds true if you aspire to work in any of the senior leadership positions that will be opening up as older nurses retire.

Nursing students are duly noting of all of the above. The American Association of Colleges of Nursing (AACN) counted 90,000 students enrolled in bachelor’s-of-nursing programs, up from fewer than 30,000 a decade ago (Click Here for the New York Times article “More Stringent Requirements Send Nurses Back to School”).

So where does this leave the ADN? Does it have a future? Actually, yes. In 2009, the Bureau of Labor Statistics forecast up to 582,000 new vacancies appearing by 2018. There is no way that nursing schools will churn out enough new BSN-trained nurses in that short time frame. Hospitals will need all the capable nurse professionals that they can get—including ones with ADNs. ADN-credentialed nurses will also be needed in “nonhospital settings,” such as community clinics, as well, according to Geraldine Bednash, AACN chief executive.

So don’t worry about your employability if your training stopped at an ADN. Hospitals will still have plenty of work for you to do. Just know that many more options and higher salary prospects could be in your reach if you go on for the BSN.

And it’s less of a time investment than you might think. Remember, once you’ve completed your ADN certification, you’re already more than halfway there. Some ADN-certified nurses achieve their BSNs to in just another 12 months. Many schools ease the burden by offering courses online. Some, such as the University of Buffalo, go further and offer their entire BSN programs online.

Nursing organizations like the AACN hope to see many more nurse professionals make the BSN jump. They’re linking up community colleges with four-year colleges while encouraging RNs everywhere to take advantage of the program offerings.

“Patients deserve the best educated nursing workforce possible,” states the AACN. “ AACN stands ready to work with the larger nursing community and representatives from associate degree and diploma programs to expand awareness of degree completion options, facilitate the establishment of articulation agreements, and enhance the educational preparation of the nursing workforce.”

Further Reading: ADN and BSN Nursing Pathways: What are the Differences?

Learn about becoming a Registered Nurse, LPN or LVN in your state:
To View Full U.S. Map Click Here.

All school search, finder, or match results, as well as colleges and universities displayed as "Featured School(s)" or "Sponsored Content" are advertisers that compensate us for placement on this site. The resources, editorial content, and school evaluations published on this site are developed independent of the schools that advertise here.

Rasmussen University
Featured Program: Whether you’re just entering the field of nursing or looking to advance to a higher level, we have the program and support to meet your needs. Our pre-licensure programs include Practical Nursing Diploma; LPN to RN Bridge; ADN and BSN.
Request Info

Northern Illinois University
Featured Program: Finish your degree in just one year! Take the next step in your nursing career with the RN to Bachelor of Science in Nursing program from Northern Illinois University. In just 11 courses and as few as 12 months, you can enhance your skills in essential areas like critical thinking, health assessment, and evidence-based practice.
Request Info

Arizona State University
Featured Program: A Bachelor of Science in nursing degree gives you the skills you need to confidently provide patient care in a range of settings while preparing you to address the future challenges in health care.
Request Info